Over two years ago I started studying at the École de Joaillerie de Montréal (Montreal silversmithing/goldsmithing school). They offer a full time CEGEP level program and a part time adult program (which is the one I'm doing). There are 6 levels of silversmithing and a 7th level to learn to work with gold, although I don't know anyone who could afford to do it just for fun with the price of gold these days...

I really like the way the course is given. You have a certain amount of projects to complete to finish each level, each of these projects requiring you to acquire a certain set of skills. Within the given parameters, you are pretty much free to do what you want. The classes are a mix of levels, each student having a bench and tools and working at their own speed and level. The teacher and assistant go around to each student to help, show a technique, give feedback, correct mistakes, etc. The great thing about this system is that you get to see what everybody else is doing, which is not only inspiring, but also gives you a chance to learn a lot by looking at the techniques the other students use for their (most probably) very different projects.

So far I have completed levels 1 and 2 in 3 1/2 sessions (60 hours per session). It's long but it's impossible to complete the projects in each level in one session if you don't work during the rest of the week (there are free workshop hours during the week so you can work some more on your own) and for the first two sessions I was way too scared to do anything on my own and ruin it all. After that I started going a day a week. And I didn't even work on my class project. I figured it was time to make some jewelry to sell because that's the whole point. I'm taking a break right now, for various reasons, but I'm still thinking about my projects, coming up with designs, writing down notes and ideas for when I start again.

The following picture is one of my projects for level 2 : "jewelry item with cabochon stone", and my favorite piece so far. The stone is kyanite and around the bezel is japanese paper encased in resin. I just love it and wear it a lot. 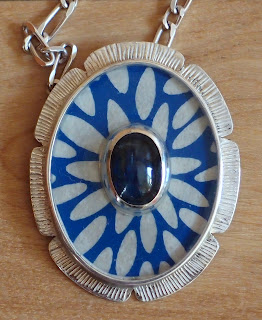 Posted by Renelde Napoli at 13:21 No comments:

Email ThisBlogThis!Share to TwitterShare to FacebookShare to Pinterest
Labels: jewelry

A while back, Jessica Brogan hosted an Inspirational Deck Swap. I really wanted to participate. I had prepared my cards and was only missing the quotes, but then I had a shoulder injury which kept me lying down for 1 month and hardly moving for another month so I missed the deadline. I was very disappointed, but figured I would keep them for the next one.

But that's not what happened. Just before Christmas I had a supper with some women I really love, the mothers and owner from the home daycare where both my kids went. After years of seeing each other daily (most of us had two kids who went there) we all became friends. Not only were our kids wonderfully well taken care of but we got friends out of it. Aren't we lucky ! Anyhow, back to the supper. We had a gift exchange. Meaningful gifts, not the Have-a-good-laugh-get-rid-of-it-the-next-week kind. So I decided that I would use my deck of cards as a gift. I'm glad I hadn't put the quotes on it because in our case, French is the common language (there was a mix of french, english, spanish and catalan being spoken at daycare). I also didn't feel comfortable with the idea of quotes. Honestly I tried to find 52 quotes I liked and couldn't. So I decided I would use words instead. Meaningful, positive words. I made a long list of words and sorted them.

I really liked the cards, and the person who received them loves them too. She was very touched. She picks one everyday and puts it on a board on her desk. She also took 4 and put them in a frame. It looks great.

When the birthday for another one of the girls came up, I figured she needed to have her own deck too, so I made another one. Slightly different. I didn't start with a deck of cards this time, just cereal boxes. After seeing how Ingrid Djikers uses them to make her journals I figured I should start using them too because we sure have a lot of those (cereal boxes). I like the bigger surface, and I like the color of the cardboard peeking through the paint. I wanted to make this deck even more special, so this time, since we were all eating together again, I figured I wouldn't write anything on them. Instead, I took a list of words, sharpies and the cards and everybody wrote words that were meaningful to them, some on the list, some not. Everyone really enjoyed it.

So here's a tutorial on how to make them. You'll see it's a similar technique to the envelope tutorial.

Cut all the extra tabs on the cereal box, too keep the two big sides. Pour a little bit of gesso and one or two colors of acrylic paint on you cardboard (remember not to mix complementary colors). Spread the paint and gesso randomly with a card (don't spread too much, you want to see the different colors and maybe some bare cardboard) . Let dry. 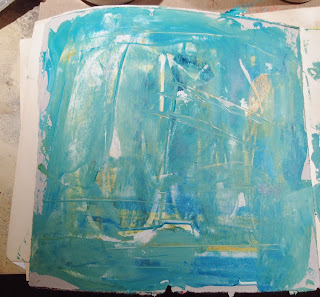 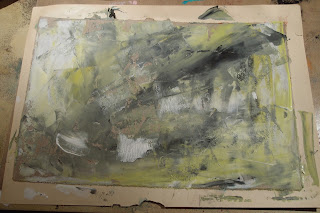 Choose a stencil (or more) and spray the cardboard. 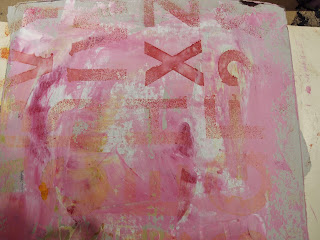 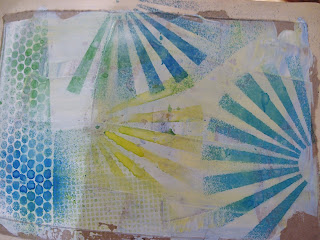 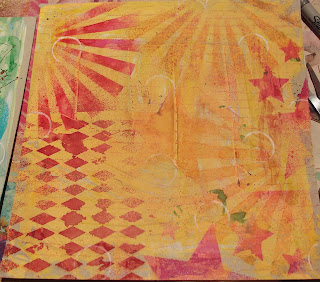 Stamp a design on the background. 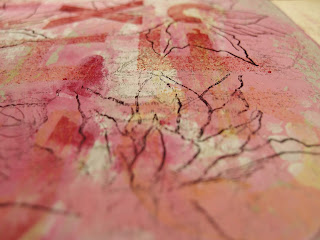 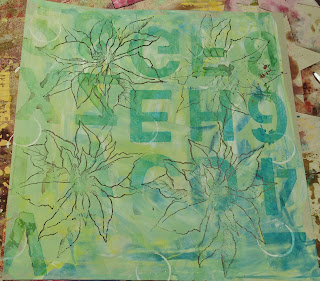 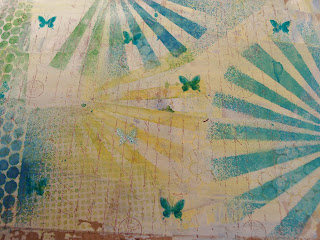 You can also turn these backgrounds into postcards or book covers or anything else really. It's easy to have a few lying around just in case...

Use a sewing machine to create random shapes on the cards (sorry no pictures for that one, but in the finished cards you can see a couple that have sewing on them) 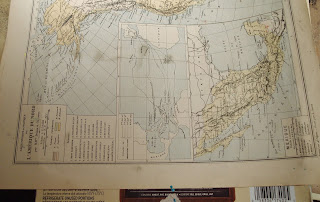 
Use a paper trimmer to cut the cardboard in rectangles that are 2 1/2 by 3 1/2 inches. Round the corners. 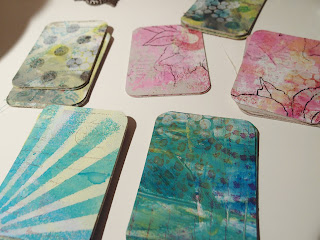 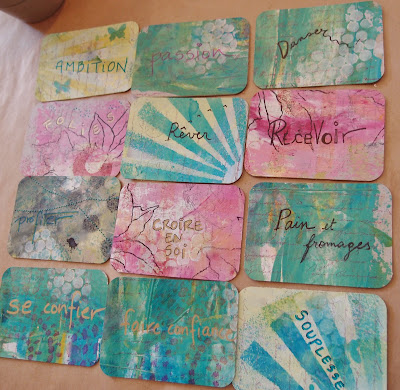 It turns out Jessica decided to hold another swap a few months after the first one. This time there was no way I was going to miss it. Here's a picture of some of the cards I did. 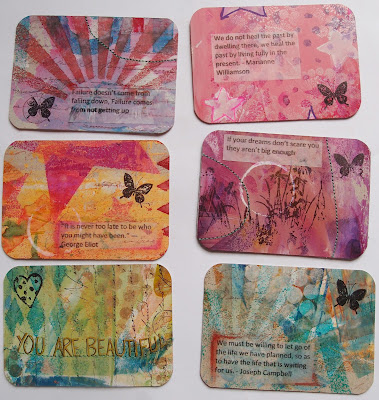 Since it's supposed to be quotes, I made an effort to find some I liked and finally did. In one of the tutorials for the cards someone printed quotes on tracing paper, so that you can still see the image through it. I really liked the idea, so I tried that. It turns out I don't really like it so much. I don't know if it's the printer, or the paper, but the ink is definitely not smear-proof and since I wanted to use gel medium to glue the quotes, and the paper is so thin it curls, it was hard to not smudge them at all. I ruined a few... I'll have to figure out something else for next time. I did just write on about a quarter of them.

I can't wait to receive a deck full of other people's artwork ! It's such a great idea, thanks Jessica.